You are here: Home / Archives for Australian AFOL

Hi, I'm Greg and I'm an Australian AFOL. What is an AFOL? The term “AFOL” means “Adult Fan Of LEGO”.

In the early days of seeing LEGO in the online hobby community, there was a visible divide between those that “child fans” and those that were the oddball “adult fans”. This was because LEGO was seen as a kids toy and not something adults could enjoy.

AFOLs are those of us that grew up with LEGO and never let go. We enjoyed it as kids and many of us have rediscovered it as adults - I'm one of them! In my case I have come out of my "dark ages" - a period where I didn't really do anything with LEGO.

What people do with LEGO varies. Some like to just see if things will float or crash them. But other - myself included - like to focus on the creativity and play side of LEGO. We enjoy creating stories in LEGO through our own LEGO City and MOCs (My Own Creation) builds.

I call myself an Australian AFOL because I live in Australia. Although technically I'm also an English AFOL as I'm English. I’ve been keeping an eye on the new LEGO UCS Star Destroyer rumour for a while, especially as I regret not getting the 2002 LEGO Star Wars original UCS Star Destroyer. But what do I think of this one? Does it live up to the hype or is it a Disney Star Wars tax too far? Read on to find out my thoughts and watch the video about the new lego star destroyer. END_OF_DOCUMENT_TOKEN_TO_BE_REPLACED It’s been a while since I last did a LEGO Train update. I’ve had some things in the pipeline which I started and immediately went on a sort of tangent. In this video I’ve been working on some LEGO City Train Custom Cargo MOCs for my trains to haul! And stay tuned to see it running through the city! END_OF_DOCUMENT_TOKEN_TO_BE_REPLACED Looking like something straight out of the Tim Burton era of Batman, this is a long, sleek car that provides a fun and solid build. Help Batman chase The Joker through the streets of Gotham City! But is it the best LEGO Batmobile ever made? END_OF_DOCUMENT_TOKEN_TO_BE_REPLACED In this video I’ll show you some of the changes I made to the Apollo inspired Mission Control from part 1 of modifying the LEGO City Deep Space Rocket Launch Control 60228 and the all new Top-Secret AREA 51 Planet Test Area! END_OF_DOCUMENT_TOKEN_TO_BE_REPLACED This is part 1 of my modifying the LEGO City Deep Space Rocket Launch Control set 60228. In this video, I’ll be working on the launch control to turn it into more of a Mission Control similar to what you see at NASA with their Apollo Launches 50 years ago! END_OF_DOCUMENT_TOKEN_TO_BE_REPLACED This is the 2nd part of series around combining 2 Unikitty Unikingdom Fairground Fun sets (41456) and extending them with some extra track pieces. In this video, I’ve got some more track including one important vertical part and I’m not afraid to use it!
END_OF_DOCUMENT_TOKEN_TO_BE_REPLACED 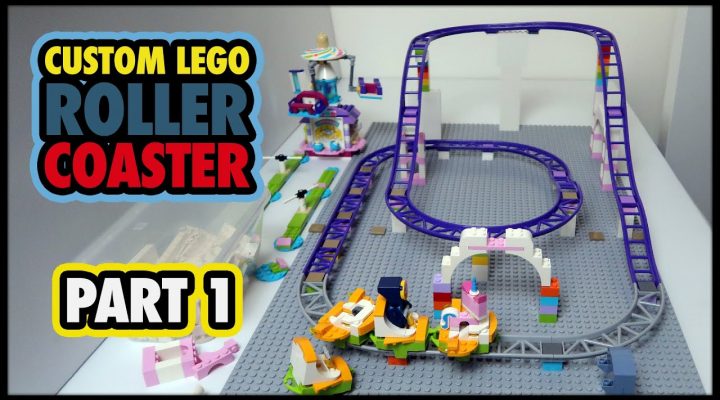 I’ve mentioned a few times that I was going to combine 2 Unikitty Unikingdom Fairground Fun sets (41456) with some extra track pieces. This is part 1 of how to build a custom LEGO Roller Coaster and I’ve learned a few things already! END_OF_DOCUMENT_TOKEN_TO_BE_REPLACED LEGO has returned to space in a big way! Not quite the same as the Classic LEGO Space theme, this year there are 6 sets sending LEGO to Mars. This is my review of the LEGO City Deep Space Rocket and Launch Control (60228)! END_OF_DOCUMENT_TOKEN_TO_BE_REPLACED