This is the last of the LEGO Speed Champions 2018 sets I’ll be reviewing for now. I’ve quite literally saved the best for last with this one! The Porsche 911 is one of my all-time favourite cars. And in this set, you get 2! Brilliant! That’s a pole position start in my books!

branding. You can see both cars racing the track with the pit chief in the background, but there’s nothing special other than these 2 splendid automobiles. In the top right is the iconic Porsche Logo which has been around since 1952 (I like that kind of history). Around back we see a few more angles of the cars along with a few of the play features the set promises. The pit board and lap counter features are simple but neat and I hadn’t expected them at all given how good the cars look. In the top right, you see the original cars in all their splendid glory (and obviously matching colours). I do have to have a slight grumble about how it is packaged which is consistent with what I’ve said a few times previously. And that is about how the sticker sheets are packed. In this case, it is clearly stuffed in last as you can see, resulting in a bent sheet of stickers. 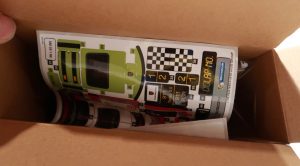 Anyway, in this case, the stickers were fine after I flattened them out. There’s quite a lot there, but the truth is there aren’t that many per car. The 911 RSR, being a heavily sponsored race car, gets the majority of them. The 911 Turbo gets just a few to add detailing and the rear window. For the build, you start with the 911 Turbo first. It’s a change from the norm with the way the chassis is built. In the other models of this season, it’s been based on a chassis piece with clip in wheels.

With the 911 Turbo, it builds up from a 6×4 piece and an S plate (best name I’ve got). The wheels are attached via 6 long technic axles and technic 1×2 bricks. For the sides, they use a SNOT method and are simple and sit on a flat black and green line. Similarly, the wing is a basic construction, again, using SNOT approach. Around back, the bumper is similar and makes nice use of a LEGO lollipop piece as the exhaust. Where this car gets really interesting – and kind of ingenious – is with the headlights. They are constructed using a 3 long ‘twisted’ technic piece. On one end there is a simple clear flat piece attach via a simple technic stud piece. On the other, it’s attached to the chassis with a 3 long technic clip. How it slots to together is, to be frank, perfect! It looks great.

Stickers on this car are few and provide the black line around front and back bumper, the rear windows, number plate and the bonnet’s front logo.

The RSR, on the other hand, follows the same build technics familiar from the other Speed Champions cars. Based on a chassis piece and clip in wheels like before. The sides are attached using the SNOT method, and a single 4×2 flat plates with stickers on, along with two black L pieces to finish the bottom.

For the details, the rear wing uses the same technic as the Ferrari 488 GT3 “Scuderia Corsa” with a pair of bent black skeleton arms. Around front, there’s some really nice layering using 1×2 and 1x1x2 angle blocks along with curved pieces. Between the door and rear wheel arch, there’s a single black curved part sticking out. Looking at the photos, this is an air intake. In terms of stickers… There are quite a few and some are very fiddly being 1×1 in size but most went on OK. The one I got wrong was the one over the windscreen. The trouble is, there’s no way to easily line it up and if you put it down too soon, you end up with a dogged edge when you remove it. I missed it… Twice 🙁 It’s not bad but I will always know it’s there if you know what I mean. Lesson learned for next time.

The final part of the puzzle was the pit lane. As you’d expect this was very straightforward but, it did have a nice feel as it came together. There were nice touches in the mechanism for the pit board and lap counter using simple single technic piece attachments to make them swivel easily. There were a few big, easy to apply stickers that provide the numbers, lap positions and Porsche branding.

Both cars and indeed the pit lane all look great together! Everything in the set is very complimentary of each other and the whole set works well together.

Like I said, the Porsche 911 is one of my favourite cars and this LEGO Speed Champions version brings that car to brick life perfectly.

From the side profile, you can see the classic 911 shape that has evolved over the years. That flat front building up the bonnet, the windscreen and into the sloping rear of the car to that classic oversized wing. Splendid! You can also see those Technic connected wheels under that arches. From the front, you can see those headlights I mentioned. There’s not a lot of note here as you’d expect with this being a road car. There’s the Porsche Logo sitting proudly on the bonnet. It does look a little square over the arches and on the roof, but that’s a limitation of the scale involved. Around back it’s a lot more interesting – excuse the off angle black pieces. That massive wing dominates the rear of the car as it should. But you can still see that perfect shape of that rear bumper and the exhaust poking out beneath it. I usually do a top-down shot of the car, but as the LEGO Designers did something a bit different, so have I. This angle shows the interior where they’ve used brown pieces to mimic the interior of the car. One pleasant surprise I hadn’t noticed on the packaging was that the driver is a female. As you’d expect, driving such a great car she is smiling from ear to ear. Her outfit is a simple – I think denim – jacket front and back with a good clean print. Her face is only printed on one side.

This car has a lot more going on in the finished build the 911 as you’d expect. There’s a lot of little details and angles throughout the car to capture the aerodynamics and air vents of the race car – note the black pieces just behind the drivers door. You can see the similarities in the shape, but you have to remember this car is decades newer so has softer angles. The stickers show off the sponsors as well as adding flashes of colour.

From the front, that same aerodynamic shape and vents come into play. The stickers complete the look and add the headlights – which are physical pieces on the 911. That big Porsche name sticker tops the windscreen. The studs are unusually pronounced on this design thanks to the lower profile of the bonnet scoops. From the back, this thing looks mean! A huge wing, lots of aerodynamics from the rear splitters and those exhausts poking out. There is a clever bit of work to create the angle and slope on that lower wing using a small hinge. From the top, the drive has a lot of space in the cockpit. You can also see the venting around the bonnet and the side shapes. The window stickers and huge Porsche logo are best shown from this angle.

The driver is again a happy soul and thankfully doesn’t have the cheeky smirk found in other cars. He’s wearing the Porsche team’s racing overalls which are the same print as those found in the Porsche 919 Hybrid set.

The final piece is the pit lane. As I said, it’s a really simple build but its addition adds so much to the set’s aesthetic and playability. The motion of turning the lap counter and pit board to show positions makes you want to race lap after lap – well 4 anyway being a square piece. The red and white pieces give a burst of life. I did make one modification to this pit lane which was to move the flag holder along slightly. This meant that the pit guy could stand next to the wall and hold the pit board through the gap. Otherwise, you’d never see the board.

He also wears the same Porsche team overalls as the driver and has a brilliant white smile. The face design they’ve chosen really brings the character to life as he gets to watch these fabulous cars race lap after lap. Not a bad job. So what can I do at this point other than recommend it? This is a slightly more expensive set as it features two cars and the pit lane. But at £34.99 (GBP)

You get two cars, one of which is a piece of automotive history. Add to that lots of play features through the pit lane and a great selection of parts and you have a set that will be enjoyed by any car enthusiast – or soon to be an enthusiast! The playability seems to be a trend with the Porsche sets through the inclusion of more than just the cars.

I knew I would enjoy this set, I had, again, underestimated just how much I would enjoy all aspects of it. Most satisfying. Now to find a home for it in my LEGO City.